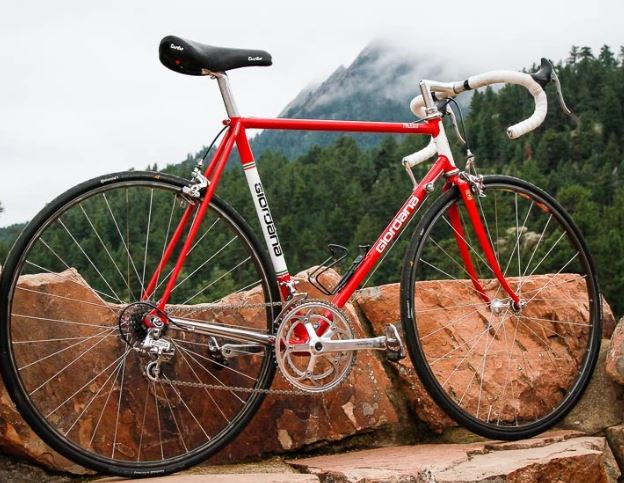 "John Kim created this blog, Virtuous Cycle. He used to live in Los Angeles and loved riding that unexpectedly awesome city for exploration via bike, but has traded in city living for the Green Mountains of Vermont! When he’s not out for a ride, he uses his expertise in Corporate Social Responsibility to help companies do well by doing good. Find him at virtcyc@gmail.com, VirtCyc on twitter or instagram, and work John at LinkedIn."

How / why did you fall in love with cycling?

"I loved the freedom that a bike gave me as a kid in the suburbs to explore my neighborhoods, go further than I probably should have been allowed, and rip around on local trails."

But I didn’t really fall in love until my cousin lent me, I believe in 2000, (ended up being a long-term loan) his steel Giordana Polaris built with a mix of Campy Chorus and Shimano 600. I didn’t know anything about road cycling until I borrowed this bike but it was love at first ride. It was smooth and fast and gave me that feeling of flying.

Favorite bike (that you own or covet)?

My favorite bike was the aforementioned Giordana Polaris (looks very similar to the one here) and I love the steel Serotta Fierte roadie that I built up. But the one I covet now is a Crust Evasion - seems like the potential do-it-all bike that I’m looking for to cruise around the dirt roads of Vermont!

What’s the most memorable ride you’ve done, and what happened?

There’s a few good ones to choose from, one of which includes hitching a ride from Tony in Maryland/W. Virginia, in a pick-up filled with toilets, siding, windows, and other house building detritus, after we discovered that the trail was completely washed out, it was starting to get dark, and we were about 1.5 miles from the campground via trail but about 30 via road. But my most memorable ride must be my first bike-camping trip on Catalina Island, inspired by the Unpredict Your Wednesday rides by Topanga Creek Outpost. I saw their adventures on Catalina and thought I needed to do that.

A friend and I researched the trip and made plans and saw their suggestions on which way to go (2 Harbors to Avalon). But once we finally made our plans we realized that the only ferries that worked with our schedule would make us do the Avalon to 2 Harbors route which we quickly learned was not optimal. But we didn’t totally realize that until we started our trip. I felt good starting off after loading up on a burrito in Avalon. And though we had to do some road climbing fully loaded, it didn’t feel that bad. But once we hit dirt I really felt the effects of riding with about 35 pounds of stuff.

And the first 5 miles or so of dirt climbing were absolutely brutal; also didn’t help that it was probably the first time I had been on a bike in months. But that first 5 miles or so nearly broke us; it had probably taken us nearly 2 hours to do that first bit. We were nearly out of water and we were actually worried we wouldn’t get to Little Harbor before dark. But we decided to push on and were rewarded with a great descent down Middle Ranch Road and an epic ride into Little Harbor campground (which included a nervous walk-a-bike around a gigantic Buffalo) amidst the backdrop of the most amazing sunset. The fire, dinner, and little bit of bourbon we brought with us were extra special that night. 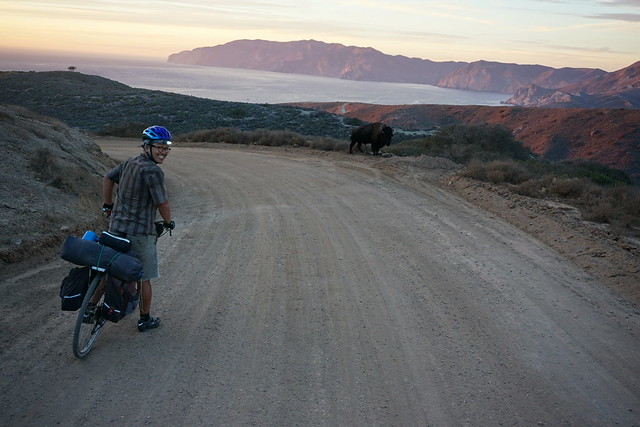 And the next day’s ride from Little Harbor to 2 Harbors, though blazing hot, were a breeze compared to the day before, though equally beautiful. It was an amazing first bike-camping trip that got me completely hooked. But more importantly I proved to myself that I could still get out there and push hard, nearly break, but keep going. That was awesome and really satisfying.

Beyond this, I love and cherish every ride I get to do with my kids. It's so awesome to see them get more confident and comfortable every time they ride and to see their love of riding grow! Single tear!

Who do you admire in the cycling world?

Maybe it’s being in LA for the last few years, but I really love what Golden Saddle Cyclery and The Cub House have built on their own terms. They’ve created really cool and inviting environments and communities that could seem a little intimidating, but once you go, you quickly realize they are just all super nice, inclusive and fun people. I also admire folks like John Watson (The Radavist) and Russ Roca (Path Less Pedaled) who have both found success by pursuing their passions and unapologetically building their corner of the bike internet they want to see. 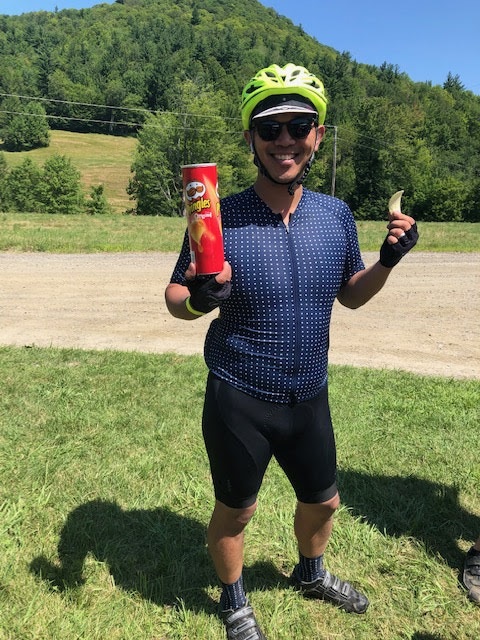 "And as an Asian-American, I admire all of the people working to make the bike world a more inclusive one for people of all ethnicities, genders, identities, etc. Lastly, I raise a glass to those who are working to make bikes a tool for everyday life possible. This includes the transportation and mobility advocates, the cargo bike builders (shout outs to Coaster Cycles, Xtracyle, and all the others!), and the regular folks who are demonstrating that you CAN use a bike do everyday things and that you don’t need to default to a car."

Top tip for a new rider, or a cyclist about to take on a new challenge?

Just get out and ride...could be for 2 miles, could be for 50, but just try to make the time to ride and be comfortable on your bike. Also, depending on where you’re riding, don’t be embarrassed to dork out with gear that will make you super visible. I used to commute about 11 miles each way in LA and I was lit up like a Christmas tree but I didn’t care how I looked, I was just glad to know that cars had NO CHOICE but to notice me.

Favorite trend or innovation in cycling?

"Bike set-ups that can fit multiple size tires and wheels. But mostly, e-bikes."

I used to be super skeptical and anti-e-bike; I felt that there was a purity in using your own physical power to propel yourself forward. And while I still think that to a degree, I love seeing the potential for e-bikes to help make bikes (and cargo bikes) a tool for everyday transportation as well as making bicycling more accessible for people who may not feel they could do it. I remember going for a ride recently and seeing a lot of older people out on e-bikes and just seeing the pure joy on their faces; had it not been for the e-bike I’m not sure they would’ve been out there riding.

What are you doing to use cycling as a force for good? 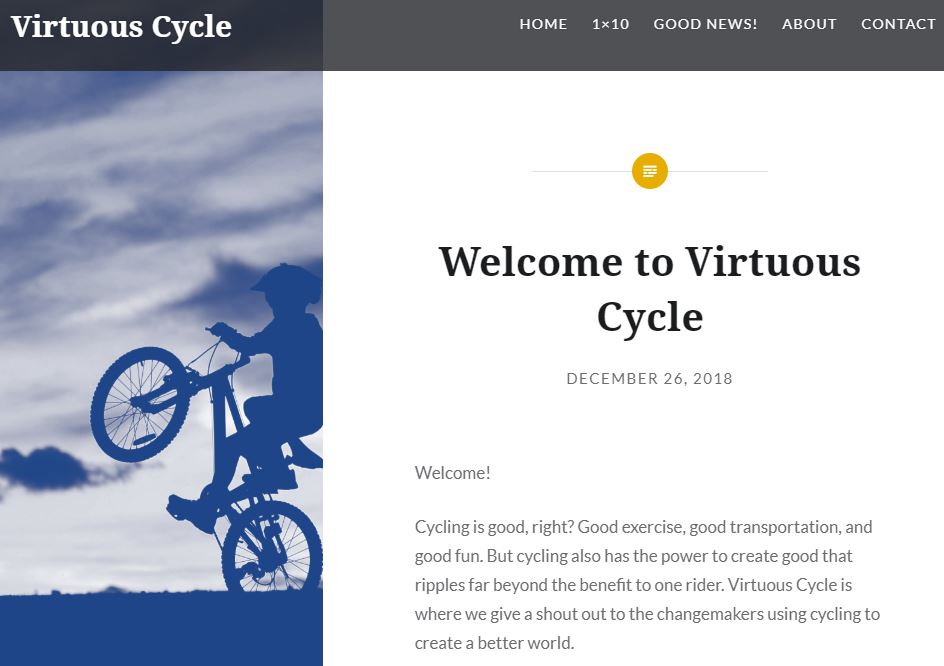 Through Virtuous Cycle, I hope to shine a light on changemakers - including people, brands, organizations, etc. - who are using bikes to do good in the world.

I was inspired to start Virtuous Cycle because, as someone who works at the intersection of social impact, sustainability and brand reputation and as someone who loves bikes and biking, I was surprised that I didn’t have top-of-mind cycling brands that I knew really cared about improving the planet and their communities, both ‘issue-areas’ that I feel that most cyclists give a hoot about. I did a little digging and found it strange that I couldn’t find much about cycling brands and sustainability, two areas that I assumed would have a lot of overlap. But I knew there had to be brands, people, organizations who saw bikes as part of the solution - to problems of inequity and exclusivity, climate change, transportation, health, and more. For example, through these 1x10 interviews I’ve learned about Velocio Apparel and their quest to make cycling apparel in a better way, about QBP’s efforts to grow cycling, be good members of their community and reduce their environmental impact, and so many more. Through Virtuous Cycle, I want to highlight these individuals, brands, and organizations and celebrate what they’re doing!

"I’m hopeful that I can expose people to brands, people, and organizations who are trying to make the world a better place through bikes. By doing so I hope that folks realize that they can choose how to spend their money on brands that care about people and the planet, channel charitable giving to great nonprofit organizations increasing access to bikes, supporting youth, etc. and see that regular people like themselves are also trying to make bikes a normal part of everyday life."

Time; this project is a complete labor of love. The response to interview requests has been overwhelmingly positive...now I just need to find the time to make sure I can post them all! A good problem to have for sure!

How can people help?

Read the blog, follow in social (insta, twitter), and share with people who they think might be interested. And if you have any recommendations on people, brands, or organizations to highlight in a 1x10 interview, please send suggestions to This email address is being protected from spambots. You need JavaScript enabled to view it. or message me on instagram @VirtCyc

"A virtuous cycle is used to describe a chain of positive events that reinforces itself. A positive result happens from an event, leading to another positive result, strengthening the circumstances as a whole."