Recently I did a small, overnight bikepacking trip with Liv Bikes on Mt. Hood along with the photographer Gritchelle Fallesgon. The event was run through Gladys Bike Shop in Portland, OR; and we had a few of their mechanics along for the ride as well. This is my down and dirty take on the out-and-back to Black Lake on Liv full suspension bikes with two Giant Bicycles bikepacking bags. The event filled within 3 days after posting, and out of 13 riders(total including Casey from Liv, 1 from Northwest Trail Alliance Trail Sisters and 1 from Fernweh Food Co.), 10 had never bikepacked before. Also out of the 13 riders, 2 people had never mountain biked before. With the amount of NEW riders during this event, I think you can safely say that it was an immense success that created a community around an adventure. Here's the summary, and maybe your shop can sponsor something like this.

I drove my truck up Mt Hood about an hour outside of Portland, rolling through potholes, wondering if I’d even know if I were headed the wrong direction. I’m exceptional at getting lost, top notch really. Well, at least the views weren’t terrible! I arrived at the gravel pit, anxious about time, but still 10 minutes early. As other folks started to roll in, I realized that I was middle of the pack, but still had a lot to take care off. As I pulled out my totes with all of my clothes, tent, sleeping pad, backpack, hydration bladder, etc.. I also realized that I am OCD and anxious as all get out. I’d packed and repacked, probably twice physically in the week leading up to my adventure and then a hundred times more in my head. Even if I’ve been playing at bikes for most of my life, I still get nervous around new ventures. 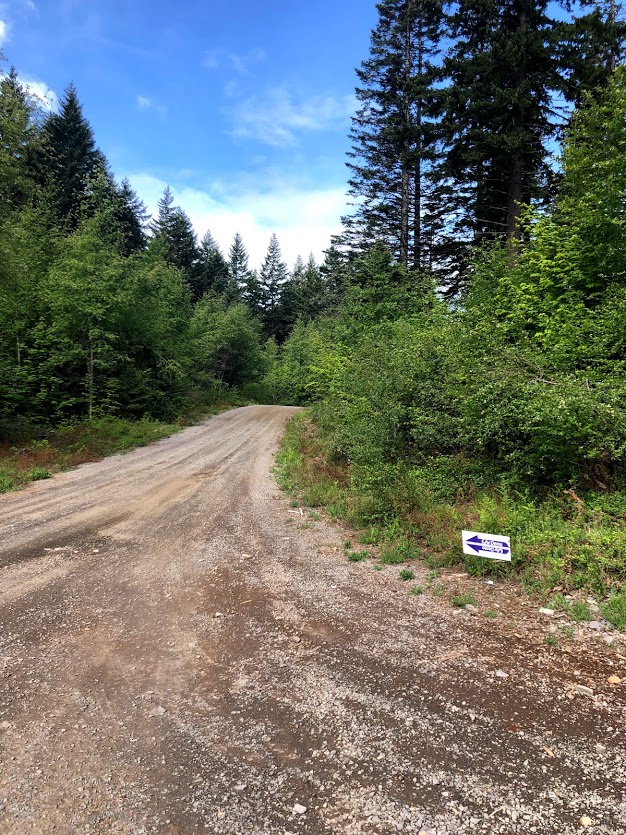 Gladys Bikes set up a "Slack" thread for us all to keep in contact. It's a wi-fi based version of what amounts to AOL Instant Messenger, where you can be on different "threads" of conversation, everyone can be in the "thread" at once and also send specific someones a notification that you "tagged" them in a comment. You can send photos and share links. Very simple to use and is a free app to download on your smart phone, or can be accessed from a computer.
Before the ride happened, they kept it very mysterious(fun!) stating that we would get meet-up information in the week prior to the trip(we knew it would be Portland-ish area) and exact directions 2 days prior. They kept teasing out photos of the bandana and swag, but also beautiful misty shots of the route. During the ride they admitted to riding the route only 3 days prior to execution and there was snow at the top of our trail. They released temperature information and their own pack-lists and for the most part, everyone was comfortable during the ride. The mystery was a great way to hide that they might have had a few back-up routes in mind, in case the snow was still too low to do the best ride. Speculation on my part, but it was engaging to say the least.
Now we use the Slack to share photos, gear recommendations, and ultimately keep in touch, although phone numbers were also exchanged. 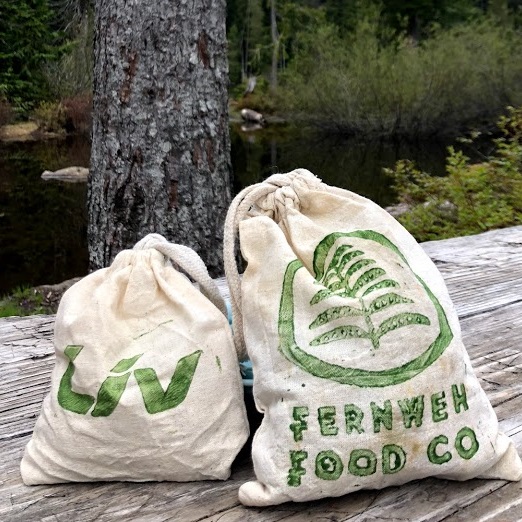 I was so stoked to see one of our QBP WMBS Alumni, Casey Wytaske, at the van smiling and setting up one of the ride leaders, for our adventures. After the usual waiver dance, Casey handed me two Scout bags (the Bikepacking Handlebar bag and the Bikepacking Seat Bag - also courtesy of Giant/Liv) to pack, along with a small ziplock (which would serve as our bowls for the food by Fernweh Foods) full of chapstick, hairties, and a rad patch to always remember the ride. Ultimately we used a couple of Voile straps to hold everything tight, as the bags from Giant/LIV were rad, but there were a couple of design features that we collectively would change, however we didn't own the bags but a small slit in the buckle capture would've just made it easier to gain leverage over the system, then tuck it away). Then Casey got me sized up on a bike, she had set aside a Medium Liv Pique (I'm 5'6"), and I couldn't be more stoked. As far as all the folks on the ride, everyone was properly sized and the suspension seemd fairly dialed, even at very close to the base level settings for most of the folks, Although the shock pump did come with us just in case, and was needed only once. he Liv reps were excellent at getting everyone set-up with pedals and suspension settings, then the ride leaders from Gladys were aces at getting the bags and voile straps to cooperate on the bike.

Ashley Lance from Fernweh Food Co. also handed me two small cotton sacks full of my dinner and my breakfast for the next day. One contained a Vegan, Gluten Free Mushroom Pot Pie home-made, home-dehydrated dinner; and the other a Vegan, Gluten Free Sweet Potato, Chia, Dates with Cardamom which was my home-made, home-dehydrated breakfast.  If you have need for backpacking, bikepacking, or other dehydrated food needs, these are some serious eats, check them out! 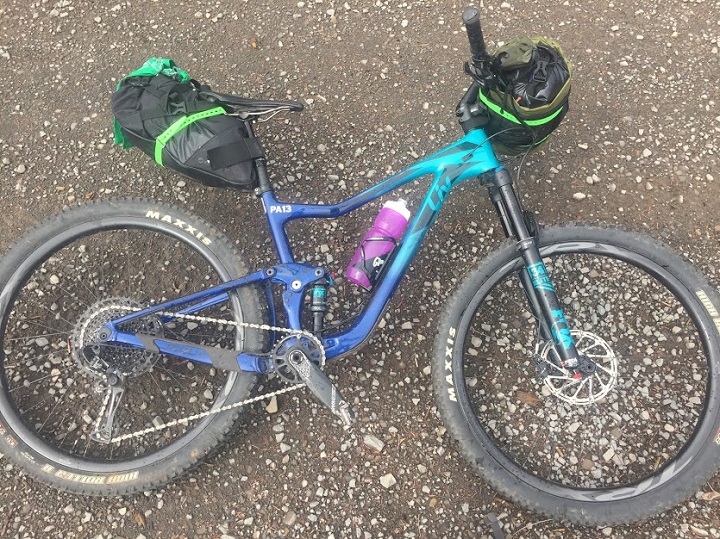 Luckily, I was sharing a tent. So we were able to split the weight and packing of the tent. I'll create a list to link to in the bottom of this posting, but I won't bore you with the nitty-gritty, but if you want it as a template to start your own checklist for a ride like this, it will be available. All in all, I think I did a fairly good job of packing, although I was thankful to everyone who brought extras and shared because it made the whole group have a great time, and ultimately, If I'd had to share more than I planned to, there might have been more grumbling and uncomfortableness. Also thankful to all the wonderful people with their amazing personalities and incredible adventure stories to tell around the fire. 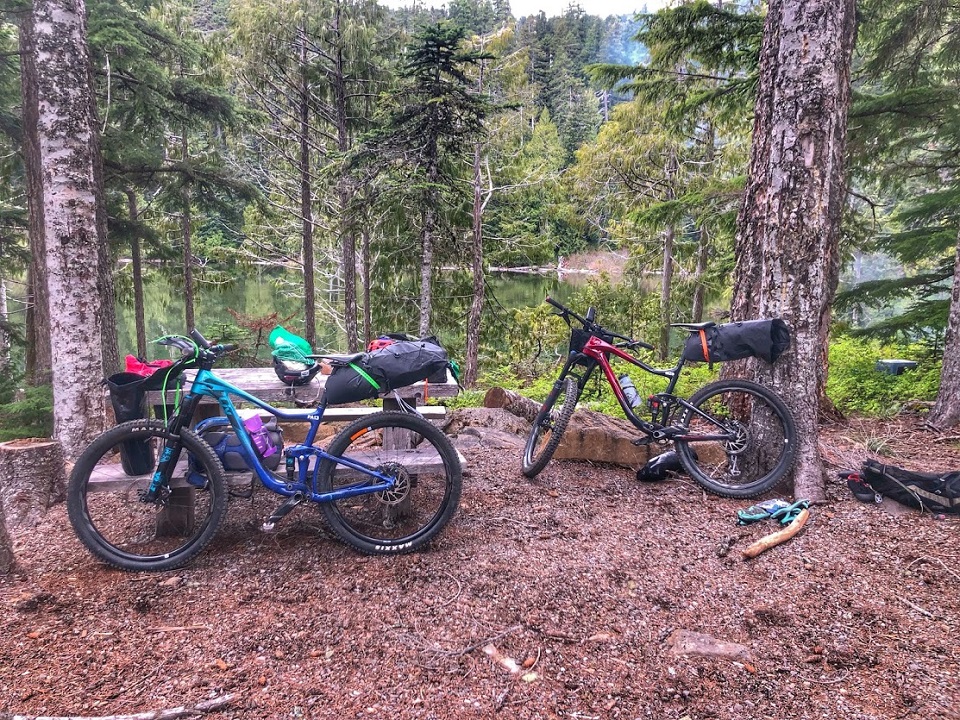 Hurt. A lot. For me at least. Battling with asthma has been a steep learning curve for me, and ultimately, I was not in shape for this ride. Most people will look at the route and smirk because in reality, it isn't that long, and isn't that much of an elevation change. However, given the group we had, I think it was pretty perfect. Enough "up" to satisfy most with a day of riding, and then camp set-up well before dark; along with food and fire. And given the varied range of riding levels, I think that some of the newbies found it challenging but do-able and the the advanced riders could go fast enough that it would satisfy that itch to shred. There was also a ton of support for us end-of-day riders, the last-to-camp riders, anything from whoops! to clapping to verbal support for the climb. This is the energy that we need to keep finding to be able to attract new people in. No one wants to get to the top of the climb to hear, "Dude, your socks don't match." And while we had an excellent group out that day, much of it stemmed from Casey herself, keeping folks positive and sweeping me up with the end of the ride, and ultimately being the rad human she is.

The ride back was basically all downhill, and was a fun mess of folks getting rad, some lost their shoes (strapped on the outside of their packs) and had to go back for them, and we lost the photographer at one point too as she sprinted ahead to try and find another spot to perch. It was a loamy, sticky session with a few creek and trickle crossings that lent itself well to group. A pretty steep grade, with a few water bars, less switchbacks, and a downed tree. Some loam near the bottom wandered through a small flat of trillium and currant bushes lended itself well to the lush green and decadent forest smells. The way down, you're also food-and-water lighter, as well as firewood; I think my seat bag was rolled to half-way smooshed. 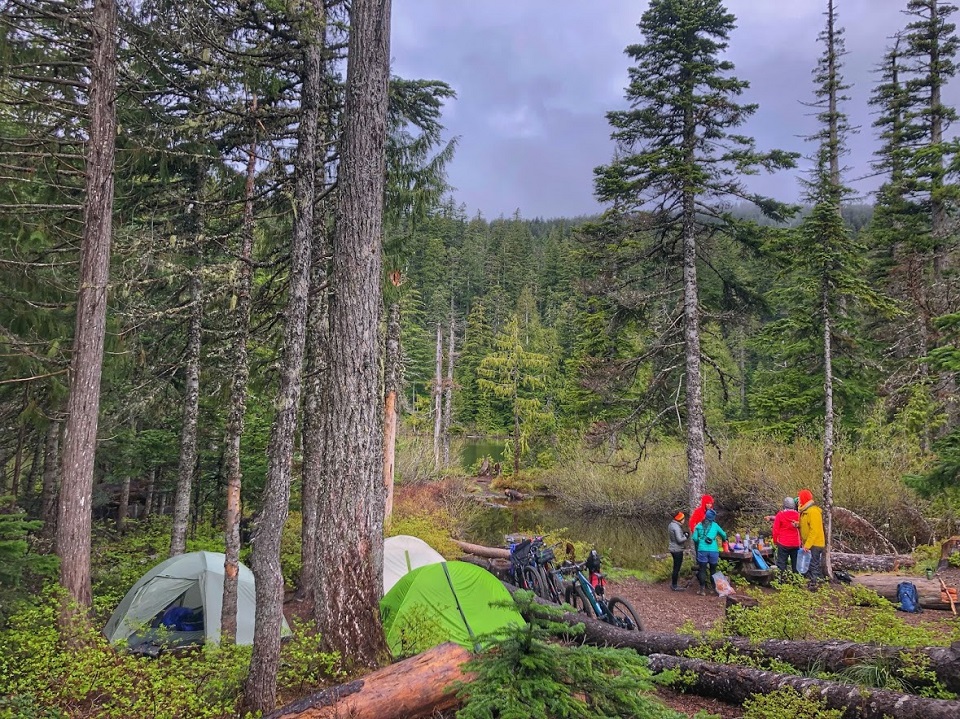 About 20 feet from our campsite we had a breathtaking view of the Northeast side of Mt. Hood. Black Lake was probably a small, quarter-mile lake all said and done. The water was so clear and the trees went right up to the water line, as well as a few of our campsites. We ended up sharing the campground with a family and then a few twentysomethings that decided it was a great idea to run a chainsaw around 9:30p. We all chose to huddle around the one campfire that didn't have an trees over it, so that we could all try to fit around the fire pit. We also ended up lining all of our food/stoves up on the same picnic table, and it was awesome how many different setups there were. Ultimately, we all ended up talking about gear and those of us that had been camping before, admitted to trying quite a few new pieces on this ride. A small outhouse was a luxury, although a few of us enjoyed our morning walks ;).

As a low-key, grass-roots kind of marketer and social media presence, the struggle is ALWAYS to bring in new people. How do you access them? How do you get them to come out? How do they even hear about you? With the amount of NEW riders during this event, I think you can safely say that it was an immense success that created a community around an adventure. A community that continues to stay in contact and create new riding opportunities, and hopefully Liv will decide to continue this strategy in the future(check out their Summer Vibes event listings here). And the sharing, the struggling (in my case), and the absolute sh!t-eating grins that were to be had all the way around should show that with the help of one of your reps you can create fun demo events like this that cater to your riders, even when they aren't the "traditional" road ride. Ultimately, it made me realize that I needed a full-suspension, some rad bikepacking bags, and some rad camping gear; which is the ultimate goal of a demo, is it not? We (royal) don't always get to track that kind of  marketing but hopefully you see an uptick in the next year in bikepacking specific materials; probably in the Portland area, and hopefully through Gladys Bikes which is the shop that hosted the ride and lent us a few ride leaders. 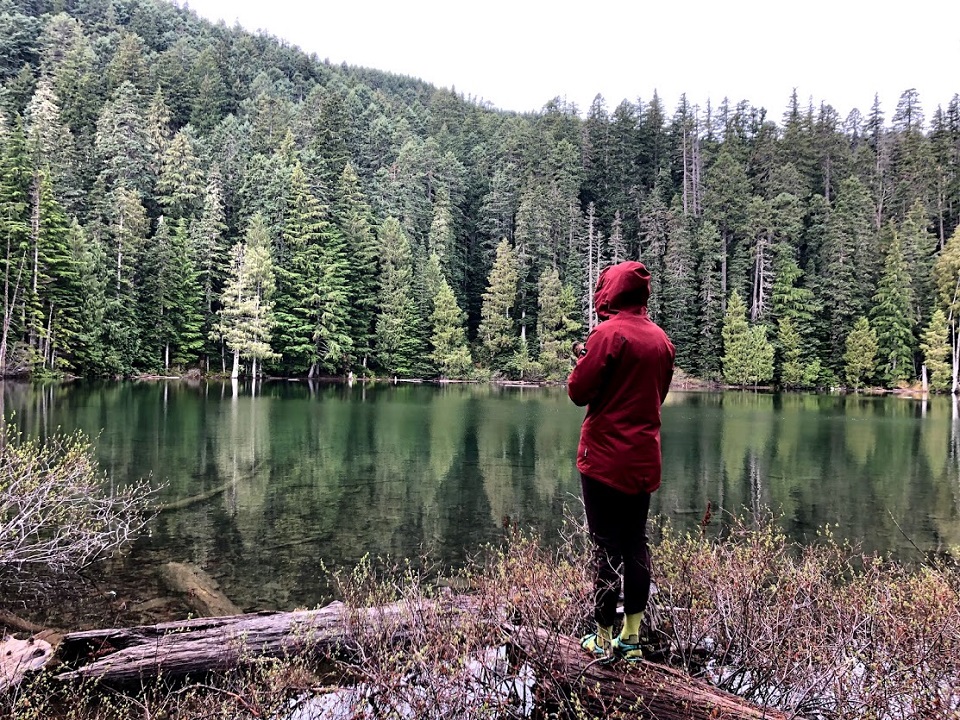 A smattering of photos are available on IG: #LIVanywhere.
http://nw-trail.org/tag/nw-trail-sisters/
Check out the listing of LIV Summer Vibes events where demo bikes are available, near you: https://www.liv-cycling.com/us/events