I’ve been going to the massive bike racing festival known as the Sea Otter Classic for at least 20 years now and it’s impossible not to see trends over the years. Some things stay the same (like the downhill and slalom courses) and some things change. Some of the notable changes that I observed this year were an increase in the number of vendors displaying versus years past, as well as what they were displaying. One of the Sea Otter employees said that the booth count had grown by over one hundred new companies displaying and that there had previously been something like one thousand companies displaying. This was actually observable in the newly paved area dedicated to vendors (light green area on right side of the map) as well as companies being tucked into just about every open space possible. The two things that really struck me though were the number of e-bikes on display as well as the number of dedicated kid’s bikes and kid targeted components.

E-bikes are not just for Europe anymore. There were a ton of companies from large to small displaying, and test riding, all categories of e-bikes. Bosch, Shimano, Yamaha, and Specialized all have well developed center drive motors with the Bosch, and Shimano motors being utilized by many frame manufacturers. Yamaha has bikes under their own name and supplies motors to Giant bicycles as well.  Specialized has a proprietary system only used on their own brand. It would actually be easier to list the companies that weren’t currently highlighting e-bikes than the companies that were. The money is there to push this too as I heard that the e-mountain bike race winner took home the highest payout of any race on the weekend. 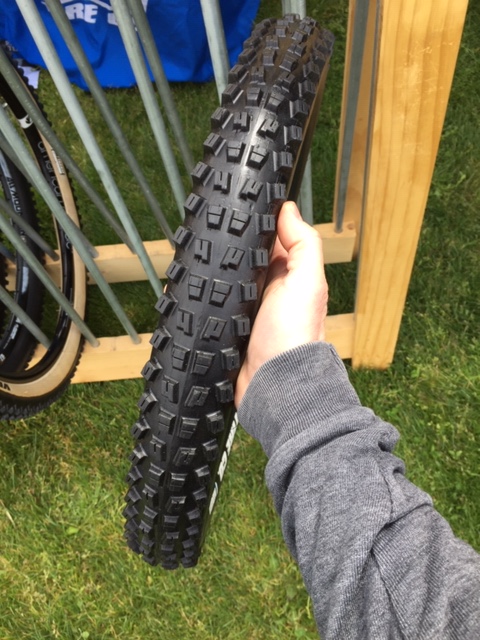 The other noteworthy trend was a growth in the number of companies and products developed to serve the younger riders out there. Since I have a particular affinity for both tires and suspension, as well as having two children, these things tended to catch my eye. Vee tire is a relatively unknown company within the US that had some impressive features in small diameter tires. Dual compound rubber, high Tpi tubeless ready casings, and smart tread designs were present in both 20’’ and 24’’ tire sizes. They also had aggressive tread designs in 12’’ & 14’’ tire sizes as well. Hayes group had Sun Ringle Junit tubeless ready rims/wheels ready to support the emerging tubeless 20-24’’ tires coming out. 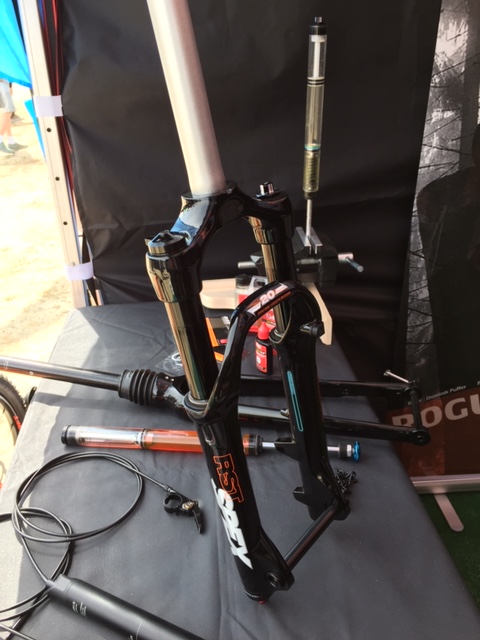 RST had their Spex 20 and 24’’ suspension forks featuring air springs (with at least two different coil negative springs for tuning), and oil dampers sporting external compression and rebound adjusters. It had a 15mm thru axle, and post mount on an 80mm travel chassis. They even went so far as to tune the seals for less friction for a lighter weight rider. Manitou had some very impressive kid targeted products as well. They had the Machete  Junit 20 and 24’’ forks with air springs and adjustable oil dampers. They opted for boost spacing and tapered steerer tubes though which might make them a bit more difficult to retrofit to existing bikes. My guess is that these forks are targeting an emerging class of high performance kid’s bikes though rather than a smaller class of existing upgradable bikes.

Also at the Hayes booth under the Answer logo they were showing off their Junit handlebars and grips that were made with super small hands in mind. The ends of the bars tapered down to a very small diameter (maybe ½’’) and then took a special lock-on grip that was around ¾’’ diameter. The grip had a plastic portion on the inboard end that was 7/8’’ diameter and provided a space to clamp just about anyone’s current brake levers and/or shifters.

It’s quite possible to chalk up the increase in vendor attendance to the loss of Interbike this year. Many of these companies likely would have displayed at Interbike but opted to put some of their marketing message out there at Sea Otter since the Interbike venue was no longer an option. Seeing this industry growth at Sea Otter was definitely encouraging but what gives me even more hope as to the future of the Bicycle Industry was the number of kids there riding around on bikes. And it’s good to see the industry addressing the growing number of young talented riders with a growing number of products sized and built specifically for them.