Compilation by B Vivit

Guilty pleasure means different things to different people, to some, it means splurging on version that is more expensive than necessary. To others, it is the one tool you keep around despite there being better versions. Still, to others, it can be the mind-blowing pleasure that one has while having or using that thing, or possibly a reminder of the influence we have as people on one another, including the old-time tradition of passing down tools from master to apprentice. One thing we can all agree on, is that mechanics need tools to do their job. Sometimes those tools are expensive and soemtimes they aren't. That doesn't necessarily mean we can't have nice things, does it? Check out the interesting things that our instructors consider necessitives to have in their toolboxes! Maybe it'll help inspire your thoughts about what to get mechanic who has everything...

It goes without saying that one of the most undersung tools, and possibly the most resisted tool, is the torque wrench. While here at UBI, we hope you recognize the value of the torque wrench and using one in your repairs. There are many options out there from $35 to $600, but make sure to keep it calibrated and keep the records of the re-calibrations. Otherwise, here are a few of the instructor's favourites!

Nathan Riddle -
Topeak Joe Blow Booster Floor Pump. $160.
Well I guess my most guilty bike tool that comes to mind is my Topeak Joe Blow Booster floor pump. I don't have a great story about it nor is it a particularly special tool to me but it has helped me inflate countless tubeless tire set-ups. It does a great job but it wasn't cheap.

Vernier Caliper (any brand). $20-$200
What if I haven't splurged for a tool?  If I needed it, I purchased it (or made something else work)... and I still weld in a $16.00, passive welding helmet. But I've been stoked on the Vernier scale since the first time I learned how to use it.  It's consistent, and never runs out of power; simple and genius!  No idea what brand mine is but it has a 200mm capacity, and the ability to measure to 0.02mm!  Without batteries!

I'm a sucker for Hozan Lockring pliers. They work exceptionally well for what they're designed to do -grab lockrings by the notches with authority- but they're also amazing at so many other things. They're helpful in the frame shop to get a stubborn lug tips fastened, they adjust the heck out of inexpensive threaded headsets, and the pair I have at home has been used and mis-used for over 25 years without missing a beat..

I'm also a sucker for this old French set of Chain pliers that I have. It's not usable on modern chains, but they still work on old bushing-style chains and, most recently, I've used them to stretch the leather onto some old Flite saddles whose covers were tattered and torn.though I now have to replace the pivot hardware after a particularly rough mis-use that involved a hammer and a 27.0mm crown race seat.

Admittedly I do not spend much money on tools in the traditional sense, nor would consider any to be aguilty pleasure. As much as I like working on bikes, for me it is a means to an end...riding my bike. From this perspective, my riding gear is what I consider to be my most important bike tools.

My recent guilty pleasure "tool" purchase was a pair of Shimano SH-XC9 S-PHYRE mountain bikes shoes in BLUE. They check all of the boxes for my liking: light, stiff, incredibly adjustable, comfortable, and did I say BLUE! After riding in cycling specific shoes sense 1991, I can honestly say they are the most comfortable shoe I have used. I bought them at a bike shop, and so for someone in the "industry," I spent more than I would have liked. Worth every penny! 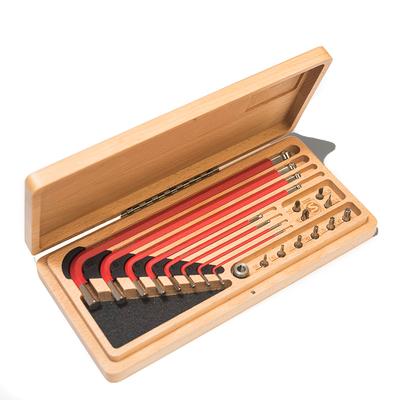 B Vivit -
A Silca HX-One Set with my father's signature engraved on the wooden box. $125

You have to have a set of hex wrenches, right?? My father and I found the shared pleasure of bicycles late in life. He actually told me at one point that he was "disappointed" that I wanted to work in mechanics(at the time, auto mechanics). I'm lucky enough to know that it was born out of his belief in my potential; as he thought his children should be world-class doctors or lawyers, or even more illustrious careers, but it still steered me away for a while. As I started in the industry, we went through some hard times, and he saw that I wasn't about to backdown on my inclination. So we started fixing bikes together. He has since passed away, but I bought this as a gift to myself to show that I believe in what I do and I deserve to work with nice things in whatever profession I choose. The lifetime warranty on that 5mm hex key (on all the hex keys) didn't hurt neither. And I'd be lying if I didn't say it was a small shot at him, "Hah! Dad, I did it anyways.."

One of my all time favorite tools is the Snap-On 1/4" ratchet. I was trained as a mechanic with one of these being a part of of my go-to tools on the workbench. Upon signing my 1st contract to work of a World Cup MTB team my 1st service manager and mechanical mentor bought me one, along with 2-6mm hex and 8-10mm deep sockets. That wrench and the bits traveled with me throughout my career working as a race mechanic. After 18 years and finishing up the 2016 MTB World Championships in Val Di Sol Italy my toolbox and most all of my favorite tools were stolen. I have since replaced the travel toolbox added some cool new things but none of them will ever have as much sentimental value as the ratchet I received from my mentor Mark.

Abbey Titanium Hammer... and pick set.. and T-Handle Wrench... and the Abbey Sockets! $180 and $150 respectively for those that can be monetarily valued.
If I'm honest about the guiltiest pleasure of a tool I've purchased, it is definitely the Abbey Tools titanium hammer.
What is it? A very lightweight hammer, especially for a traveling mechanic. Why? Because.....titanium!

As for tools that mean the most to me? The sentimental value or story of each is as follows:
The 3mm T-Handle hex wrench was a roadside find some 20 odd years on a cold winter morning commute from Boulder to Longmont, CO and I’ve been using it ever since.
The pick is the perfect size and shape and is my go to pick to remove stubborn retaining rings of all shapes and sizes. I always have several on hand and highly recommend it to anyone who asks.

The Abbey Top Cap Sockets mean a lot to me because in very large part, I’m the reason they exist.
I've seen a lot of damaged top caps on suspension forks over the years. This is due in part from poor socket use, but even with proper use the damage occurs as a result of flat grinding standard sockets, creating sharp edges on the hardened steel sockets which in turn causes the damage to the top caps. To make matters worse, it is more and more common to see top caps that are anodized black.

The idea came to me while trying to figure out ways to reduce the number of tools in and the weight of my tool box as well as thinking about ways to reduce the chances of damage to top cap finishes. Another issue with using standard 6 point sockets that are flat ground, is the difficulty of finding sockets larger than 26mm in anything but ½” drive because that requires the use of a 3/8” to ½” adapter. Jason (Abbey Tools owner Jason Quade) and I are friends and I started asking him questions about whether or not he thought aluminum sockets would be durable enough, given the typical torque specs used in the industry and I was also trying to convince my employer at the time, Fox, that we should have them made by Abbey and that we should sell them to shops. No one at the time believed (at least that was what I was told) people would spend $30-$40 on a specialty socket like that…. well, the rest as they say, is history.

Now there are several companies producing these specialty type sockets, most are pretty much direct knock offs of the Abbey sockets or are made by Abbey for the company selling them. The benefits are many - they are a like material (7075 aluminum) to most top caps, they are a much more precise fit, they are shallower than most sockets of the sizes available and all the sockets are 3/8” drive meaning no adapters are required for our torque wrenches. I smile every time I use mine and every time I see a set in a shop or in use out in the field, which is often.